Doctor Stephen Strange is a fictional character appearing in American comic books published by Marvel Comics. Created by Steve Ditko with Stan Lee,[5] the character first appeared in Strange Tales #110 (cover-dated July 1963). Doctor Strange serves as the Sorcerer Supreme, the primary protector of Earth against magical and mystical threats. Strange was created during the Silver Age of Comic Books to bring a different kind of character and themes of mysticism to Marvel Comics. 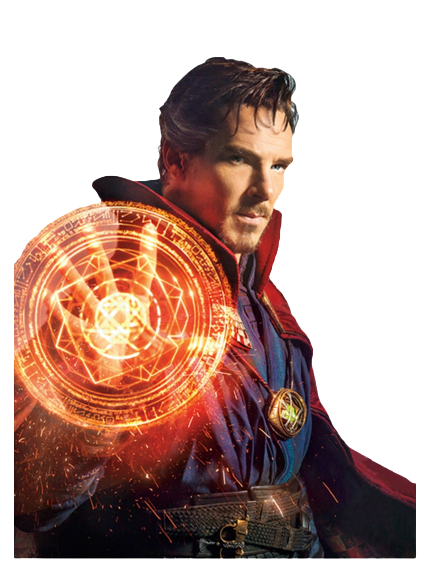 Artist Steve Ditko and writer Stan Lee have described the character as having been originally the idea of Ditko, who wrote in 2008, “On my own, I brought in to Lee a five-page, penciled story with a page/panel script of my idea of a new, different kind of character for variety in Marvel Comics. My character wound up being named Dr. Strange because he would appear in Strange Tales.”[6] In a 1963 letter to Jerry Bails, Lee called the character Ditko’s idea, saying:
Well, we have a new character in the works for Strange Tales (just a 5-page filler named Dr. Strange) Steve Ditko is gonna draw him. It has sort of a black magic theme. The first story is nothing great, but perhaps we can make something of him– ’twas Steve’s idea and I figured we’d give it a chance, although again, we had to rush the first one too much. Little sidelight: Originally decided to call him Mr. Strange, but thought the “Mr.” bit too similar to Mr. Fantastic — now, however, I remember we had a villain called Dr. Strange just recently in one of our mags, hope it won’t be too confusing![7]

Doctor Strange is a practicing magician who draws his powers from mystical entities such as Agamotto, Cyttorak, Ikonn, Oshtur, Raggadorr, and Watoomb, who lend their energies for spells.[62] Strange also wields mystical artifacts including the Cloak of Levitation which enables him to fly;[note 1] the Eye of Agamotto, an amulet whose light is used to negate evil magic;[56] the Book of the Vishanti, a grimoire which contains vast knowledge of white magic;[63][64]: 26–27  and the Orb of Agamotto, a crystal ball which is used for clairvoyance.[64]: 24–27 [65]

In addition to his magical abilities, Strange is trained in several martial arts disciplines,[66] including judo,[67] and has shown proficiency with numerous magically conjured weapons including swords and axes.[68] Strange was a skilled neurosurgeon before nerve damage impaired his hands.[56]

Doctor Strange is described as “the mightiest magician in the cosmos”[69] and “more powerful by far than any of your fellow humanoids” by Eternity, the sentience of the Marvel Universe.[70] He holds the title of Sorcerer Supreme beginning with the 1973 storyline in which the Ancient One dies,[21] and retains the title thereafter, except during an interruption from 1992[71] to 1995.[72] He relinquishes the title once again in a 2009 storyline,[38] but reclaims it in a 2012 story when he proves himself willing to protect the world even without the title.[42]

We use cookies on our website to give you the most relevant experience by remembering your preferences and repeat visits. By clicking “Accept All”, you consent to the use of ALL the cookies. However, you may visit "Cookie Settings" to provide a controlled consent.
Cookie SettingsAccept All
Manage consent

This website uses cookies to improve your experience while you navigate through the website. Out of these, the cookies that are categorized as necessary are stored on your browser as they are essential for the working of basic functionalities of the website. We also use third-party cookies that help us analyze and understand how you use this website. These cookies will be stored in your browser only with your consent. You also have the option to opt-out of these cookies. But opting out of some of these cookies may affect your browsing experience.
Necessary Always Enabled
Necessary cookies are absolutely essential for the website to function properly. These cookies ensure basic functionalities and security features of the website, anonymously.
Functional
Functional cookies help to perform certain functionalities like sharing the content of the website on social media platforms, collect feedbacks, and other third-party features.
Performance
Performance cookies are used to understand and analyze the key performance indexes of the website which helps in delivering a better user experience for the visitors.
Analytics
Analytical cookies are used to understand how visitors interact with the website. These cookies help provide information on metrics the number of visitors, bounce rate, traffic source, etc.
Advertisement
Advertisement cookies are used to provide visitors with relevant ads and marketing campaigns. These cookies track visitors across websites and collect information to provide customized ads.
Others
Other uncategorized cookies are those that are being analyzed and have not been classified into a category as yet.
SAVE & ACCEPT